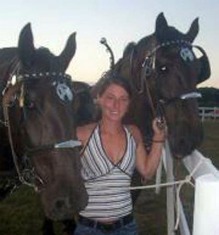 Kelsey Lefever was fired Monday as a trainer and riding instructor…

HARRISBURG - Kelsey Lefever was well-known in the Pennsylvania horse world.

The 24-year-old horse trainer from Chester County competed at the Devon Horse Show and traded show ponies and draft horses on the Internet. At Penn National, near Harrisburg, one of the biggest racetracks in the state, she schmoozed thoroughbred owners, telling them she would find great homes for their horses when their racing careers were over.

In fact, state police allege, Lefever was selling the horses - as many as 120, by her admission - to contractors for a Canadian slaughterhouse, where they were butchered and shipped overseas for human consumption

Charges filed against a Chester County woman for posing as a rescuer of horses while sending them to slaughter have prompted a new round of calls in Congress to end the killing of horses for meat in the United States.

U.S. Rep. Patrick Meehan (R., Pa.) on Thursday urged his colleagues in the House and Senate to pass legislation to halt horse slaughter after reading a report in The Inquirer that Kelsey Lefever of Honeybrook was allegedly selling animals for slaughter in Canada under false pretenses.

"This is a tragic example of why we need federal law to prohibit the transportation and sale of horses for slaughter in the first place," said Meehan, one of 150 cosponsors of anti-slaughter legislation in the House. "Horses are not raised for human consumption, and their slaughter for sale overseas is a cruel and inhumane practice that is not consistent with our values here in Pennsylvania.

Lefever duped thoroughbred owners at a central Pennsylvania racetrack into believing she would find homes for their retired racehorses and instead sold them to kill-buyers at a Lancaster auction, according to charging documents.

Horse slaughter effectively ended in the United States in 2008, when the last plant closed after federal funding for U.S. Department of Agriculture inspectors was withdrawn. Since then, an estimated 140,000 U.S. horses have been transported to abattoirs in Canada and Mexico.

Oops, you forgot something.

The words you entered did not match the given text. Please try again.

Reply JamosKaw
10:05 AM on June 3, 2021
Nicely put. Appreciate it!
https://topswritingservices.com/
how to write a good essay about yourself
paper helper
argumentative essay writing prompts
help dissertation
writing essay website
write papers
how to write an essay about a person
writing help
why college athletes should not be paid essay
help writing thesis
good opening sentences for college essays
write my papers
how write a essay
https://smilevault1.webs.com/apps/blog/show/48256738-comprar-bitc
oins-con-tarjeta-de-cr

Start a Free Blog at Webs.com